Posted by Fatty Founder on June 9, 2017
in Fatty Foodie

Adding vegetables to things usually seems like a great, healthy idea.  But what about when they put them in packaged food- does it make it better for you?  I assumed it did, so I tried Veggie Straws- like potato chips but better for you because vegetables!  But was it better for me?

When I saw veggie straws, I was thinking: vegetables.  When you look at the bag, it has a nice picture of a potato, tomato, and some spinach.  So you think “hey, those things look healthy”.  You can also see the potato just “peeking out” behind the healthy stuff, like an afterthought: 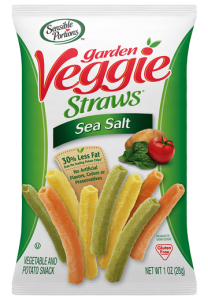 Hey, they made these out of vegtables!  They’re a healthy snack!  Easy to eat, and good for you!  However, if you read the ingredients, the truth is far different.  These are technically potato straws that someone threw vegetables on as an afterthought.  The first 3 ingredients are potato starch, potato flour, and corn starch.

There are then some vegetable products, but they are not the primary ingredients.  Many people will argue that a potato is a vegetable, but in meals is most often used to replace a starch like break, pasta, etc.

So if Veggie Straws are close to potato chips, how do they stack up against the traditional snack?  Am I better off just eating the regular old potato chip?  Or do the Veggie Straws allow me to  be a health expert who gets to lecture you in condescending tones on my superior snack choice?  Let’s examine the nutrition facts: 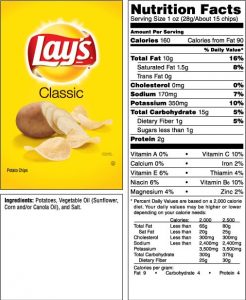 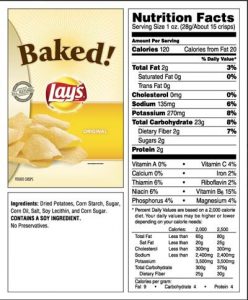 Right off the bat you can see that the Veggie Straws have a much higher sodium count.  Now, to be fair, I cover vegetables in all kinds of stuff to make them taste less like sadness.  It’s how life works.  Things that taste amazing are not as good for you as things that taste like dirt.  There’s nothing wrong with dressing things up.  Everything is better with butter and cheese.  But when you increase certain things that are bad for you, but market it as a healthy alternative, you aren’t being honest.  Which isn’t odd for a business, but still annoying.

Examining the nutritional facts also shows that the differences are not that awe inspiring.  Veggies Straws shows that they only have 7 grams of fat verses the 10 grams of fat in potato chips.  I found that interesting, and wanted to know how Veggie Strips are prepared.  They are fried, not baked.  This is once again interesting when they want to sell you on their product being healthy.  But when you compare Veggie Straws to Baked Lay’s, the potato chips have only 2 grams of fat- and no saturated fat!  The fried potato chips have the most saturated fat, but the Veggie Straws also contain some “bad fat”.  But Baked Lay’s contain none, which makes them the winner in that category.

The final test is nutrients.  I would assume (and I think most people would) that the Veggie Straws have the most vitamins.  And I would be wrong.  This is what surprised me the most.  They have vitamin C and Iron, and a very small amount of fiber.  Regular Lay’s Potato chips have Vitamins E, C, and B6.  The same is true of Baked Lay’s.

Overall, Veggie Strips grab you by claiming they have vegetables.  Your mind thinks “hey, vegetables are good for you!  And I like chips!  I bet if they add vegetables to chips they taste amazing but are good for me!  I’ll buy these and be healthy!”  But you would be wrong.  They want you to assume they are good for you because they threw some veggies on potato straws and called it a day.  But when examining the nutrition facts, you can see that the straws are not any better for you than regular potato chips.  And if you go with baked potato chips, those have less fat and more vitamins than the Veggie Straws.  Overall, you’re better off buying baked potato chips than you are getting a vegetable/potato snack.  And then you CAN be a health expert who gets to lecture people in condescending tones on superior snack choices- while eating potato chips.  It’s a win-win!!

... other posts by Fatty Founder