Posted by Fatty Founder on June 2, 2015
in Fatty Foodie

I’m back. I know, I’m a slacker. I got a lot on my plate right now (besides, you know, doughnuts), so things fall by the wayside. I’ll be better. Maybe.
SO- on to the blog. I have a new Fitbit. I loved my old one so much I decided to get a new one. And it does more stuff- yeay! I managed to break my old one, and needed something new. I know Fitbit, and liked their stuff. I had the Flex, which gave me little dots to make my steps (see old Fitbit blog), but I wanted something a little different this time. I chose the Charge HR because it actually displays the steps, and gives me a built in heart rate monitor. Both those things were important to me.
This new tracker also fixed some of the concerns I had with the Flex. This one has a button on the side that allows me to select the information I want to see. One touch switches from one screen to the next. With the Flex, you have to tap to see the dots. If you tapped too much, it was set to sleep mode. This happened a lot when I was pushing a shopping cart, because the movement of my wrist would change it over. The second concern I had with the Flex was the band- they often ripped when you slid the Flex tracker out. I had to order a few new bands during the time I had it.
The Charge HR is similar to a watch, you don’t slide it out of the band. It charges as one complete piece. The band is thicker, and it doesn’t have the little plastic snap the Flex did. The band actually fastens like a watch, and it seems more secure because of it.
The step counter on the Charge HR also seems pretty accurate. I actually did a little test- I clapped, waved my arms, and pounded my hand on the table. I looked ridiculous, BUT the tracker did not register any of those things as steps. I noticed on the Flex that sometimes clapping would register as steps. The Charge HR fixed that issue.
The one major issue for this tracker is the
I put in a pretty picture of the Fitbit website so you can see all the stuff it does. Fitbit makes a pretty site, so I’ll let you look at it:
From the website: https://www.fitbit.com/chargehr 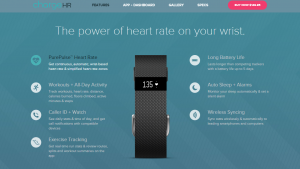 And the page where you can track your info: 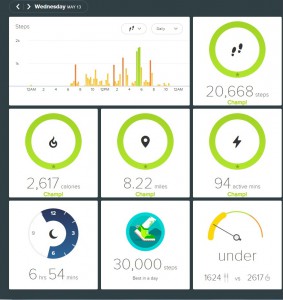 I’ll give you my rating as follows. And since it’s a fitness blog, what better way to rate this item than with doughnuts. This is far better than giving something a kale, or broccoli, ranking. So, I give the Fitbit HR a 4 out of 5 doughnuts. See the picture below:

Pros:
Button on the side allows for quick scrolling through displays
Easy to use- one touch displays time, the next steps
Tracks heart rate
You can set a timer by holding the side button
Links to my phone
Longer battery life
Automatically tracks sleep- don’t need to change it over to a sleep setting

Cons:
Takes a while to link to the phone and send over the information
The band is very thick- if you have small wrists it can take some getting used to
Cannot be used while swimming. Recommend you remove before showering
For some, the cost may be a bit high

Overall, I highly recommend the Charge HR. I think it’s an efficient and accurate tracker. It runs at $150, but that’s not too crazy for a tracker.

... other posts by Fatty Founder