Posted by Fatty Founder on July 4, 2014 with No Comments
in Fatty Fashion 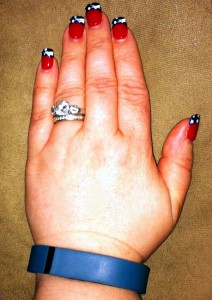 Look, this is my Fitbit on my adorable wrist!

OK- I’m back! I have a new post for all of you! Are you excited? You should be! Some ass hat hacked my blog (who does that? It’s a blog written by a fat chick about DIET and EXERCISE- what could you possibly gain by hacking it? Experience on how NOT to hack things? A bad life decision? More self esteem issues from you being a crappy hacker?). So, anyway, I’m back to the blog. And my newest fitness fetish? I got a Fitbit (yeay!)

“What the heck is a Fitbit?” you might say. And I will answer that questions because you said “heck” and didn’t curse at me. Only I can use bad words on my blog. A Fitbit is an awesome little tracking device I use to force myself to lose weight. This thing on my wrist reminds me when I’m failing miserably at my goal of taking more steps. You see, it tracks your steps, and little dots light up as you get closer to your goal. There are 5 dots total. The wristband comes preset with a goal of 10,000 steps. For those of you who don’t know, 10,000 steps is what science tells us to walk to not die of fat and laziness (by the way, the average American gets 5,000 steps SO I guess that’s why, you know, obesity). I set mine to 15,000 steps because I want to lose weight. And also, I’m an overachiever at setting goals I don’t reach. Just kidding. I don’t set goals- that’s a lot of work to not complete. Anyway, back to the Fitbit.

The Fitbit is a full fitness tracker. It not only tracks my steps, it tracks sleep, and links with “My Fitness Pal” on my phone. My Fitness Pal tracks my nutrition each day. I put in everything I eat, and it calculates calories and measures it against my preset goal (how many calories I should eat in a day to lose weight). And it does the math for me, because, American (AKA- I’m bad at math). So it tells me how much I’m over or under my daily total, then links with my Fitbit to match my steps/activity to my calories consumed.

The Fitbit site also links to the My Fitness Pal, and puts everything on one site for me. Here’s the site should you want to take a look: http://www.fitbit.com/home. Then it sends me a weekly report to tell me how I did. And to spark friendly competition it allows you to track friends who also have a Fitbit and ranks you against their steps. I, however, am not friendly and prefer to mock everyone for not walking and me always coming in first (which I always do because I’m awesome, and also sometimes cheat and put it on my cat).

I have used other trackers (I’ll also review the BodyMedia armband), but the Fitbit is the one I’ve stuck with. The dots tell me how close I am to hitting my goal, and they blink faster as I get closer to completion. And then when I hit my goal, and all 5 dots are completed- the thing goes nuts and vibrates! And its like a big giant pat on the back for reaching your goal (or a pat on the wrist I guess). If it happens to be linked with your phone (there’s a Fitbit app) it congratulates you as well with a pop up. It’s nice to have a bracelet care about me so much.

I wear my Fitbit everyday, and it makes me move. And it looks dead sexy on my wrist (look- I added a picture. I’m awesome!). Just remember- every journey starts with a step. And if you’re not into sappy sayings that attempt to inspire just think of it this way: every step you take, ever move you make, every song I misquote: you should walk to not be fat.